Smuggling
Despite the efforts of the EU, law enforcement and others, BiH continues to be a transshipment point for illegal tobacco. The state budget loses hundreds of millions of KM every year because of cigarette smuggling.
Almost every night, handfuls of residents carry goods ranging from cigarettes to fruit to cattle over the border from Montenegro into Bosnia and Herzegovina (BiH). The illegal trade is so robust that criminals have built their own private roads around border crossings near Foča and Trebinje.

So expectations were high this past November when the Customs and Fiscal Assistance Office (CAFAO) and the BiH Indirect Taxation Authority (ITA) undertook one of the most organized and aggressive attempts to stop cigarette smugglers. Operation Nightwalker was four months in the planning and included around seventy domestic and international police experts from at least five law enforcement agencies. So careful was the planning that vehicles were brought in from other cities for local police so that local criminals would not recognize them.

For four days they monitored the most active legal and illegal border crossings near Foča and Trebinje. The results were embarrassing. Police confiscated pills from one German national that later turned out to be his prescription medicine. There were no cigarette smugglers caught and no cigarettes seized.

Smuggling is a regional epidemic. The World Health Organization (WHO) last year estimated that 35 percent or more of all cigarettes smoked in BiH are illegal.

In many ways, BiH’s central location in the region dooms it to be a pawn in the global trade of cigarettes. Police say cigarettes from Montenegro and Croatia are smuggled across the border into BiH for local consumption or passed through neighboring countries and on to Europe. Bosnian-made fake cigarettes also follow a similar route into Europe. Police have caught smugglers at more than 400 different spots along Bosnia’s 1500 kilometer border.  There are also 55 legal border crossings, some of which are not very secure.

Besides smuggling, at least one fake cigarette factory operated in BiH and police say there may be more. State Information and Protection Agency (SIPA) and the ITA shut down a plant near Grude in September of 2007 that was making high quality fake Marlboros.

A 2007 US State Department report on narcotics said BiH had failed at all levels to stem the flow of illegal goods, including cigarettes and narcotics. "Traffickers have capitalized in particular on an ineffective justice system, public sector corruption, and the lack of specialized equipment and training," the report said.Montenegro has been the premier source of cigarette smuggling in the region.

The state has had such serious problems that at one point Italian prosecutors even issued an arrest warrant in 2003 for former President Milo Đukanović, while other investigations by Italian and German prosecutors showed cigarette smuggling is tolerated or even protected at the highest levels of government.

"Tobacco smuggling is the result of many things, supply, demand, price. In the Balkans it is facilitated by organized criminal gangs and corrupt governments. It is very difficult to talk about change in the region because it is hard to … monitor," said Luk Joossens, a European tobacco control expert for the WHO. The smuggling deprives local countries of millions in tax revenues and helps empower organized criminal groups by providing them hundreds of millions of KM in profits.

Nightwalker was a failure because of the pervasive reach of organized crime. "Such big actions, planned for a long time, never succeed because too many people are involved in all that and details leak. Border police have problems with corruption," says a representative from CAFAO who is not allowed to speak to the media.

Police involved had more modest goals and their own view of the program."Bad weather caused the operation’s failure. However, it can be considered a success because state agencies worked together," says Zoran Radović, the assistant to the operations commander in the Border Police Unit in Hum, near Foča.

"The important thing is that we were out in the field," says Saudin Terzić, assistant director in ITA. "Smugglers probably noticed us and gave up on their illegal activities for the time being. That is also a success."

Regardless of officials’ stated desire to stop organized crime, criminals always seem to be one step ahead of law enforcement.

The border of Montenegro is where most cigarettes enter the country illegally. The rough terrain and remote location is perfect for smuggling.

Reporters from Center for Investigative Reporting in Sarajevo (CIN) visited the area with local and border police. Near Trebinje, they showed reporters a road that, at first glance, looked like any other small mountain road traversing the rocky, dry scrub land.

The difference between this road and others was that it was not built by the government, but by tobacco and drug smugglers. The road bypasses all border checkpoints and looks resilient enough to host large trucks.

"Today, they rather use people and horses to cross the border. Look at these cliffs and rocks. It is hard to have all that under scrutiny. We don’t have enough men," says Adem Salčin, commander of the Border Police Unit in Trebinje.

The police say smugglers based in Montenegro operate a sophisticated smuggling operation, complete with scouts watching for police from mountaintops and an army of curriers to carry tobacco boxes on their backs. When law enforcement blocks off roads with concrete blocks, smugglers bring in equipment to remove them. Couriers drop their loads off at central depots, usually abandoned houses, where the tobacco is stored until it can be moved to Sarajevo or other parts of the country. They know who runs the trade in Montenegro, but the ringleaders never officially enter BiH.

Around 20 police officers in SIPA, border police, ITA and local police identified the largest tobacco smuggling operation as belonging to the Radulović family, or the Radulović Brothers from Nikšić. Police characterized them as extremely violent and well protected by Montenegrin authorities.

Radulović is a common name and police gave at least three variations of the first name. It is possible that more than one organization is operating under that name, though smugglers often change names to confuse police.

One of the names most commonly identified by law enforcement does show up in arrest records. Police in Trebinje arrested Ranko Radulović of Nikšić and six others in 1999 for illegally transporting a truckload of cigarettes into BiH worth almost 370,000 KM at the time. After an investigation, the prosecution office in Trebinje indicted the seven but forwarded the case to Montenegrin authorities in Nikšić to prosecute. A court official in Montenegro said the group was found guilty and paid a fine. No one served any time. Court officials however, did not respond to repeated requests for documentation of the verdict to be sent to the CIN.

A Ranko Radulović was identified by two different war time rape victims in Foča, according to BiH court testimony. The testimony is from the trials of Neđo Samardžić and Gojko Janković. CIN could find no war crimes case directly against Radulović. A senior police officer in Foča,, who did not want to be identified out of fear for his safety, said Ranko Radulović was a volunteer soldier lived in Foča during the war and is the same man in the rape and smuggling cases.

The views of Montenegrin authorities differ greatly from those of BiH officials. They say tobacco smuggling once was a problem, but no longer.

"Seven years ago there was quite a bit of that. Today, it’s mostly small time smugglers. Everything is under control," said Aleksandar Mandić, assistant to chief of Montenegro border police unit in Božaje.

In September of 2007, ITA, SIPA and local police raided an illegal manufacturing plant 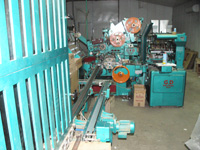 A machine from the Grude factory, where illegal production of Marlboro cigarettes was discovered in a raid by SIPA and ITA BiH last year. (Foto: Uprava za indirektno oporezivanje BiH)
in Grude that was making cigarettes. The plant included an assembly line made up of six cigarette manufacturing and packaging machines, equipment usually found only in cigarette factories. The people running the plant also had tax stamps from Serbia and authentic looking Marlboro packaging. Police found more than 500,000 KM worth of cigarettes ready to be smuggled into Serbia, along with materials worth about the same.

"We would estimate capacity, at maximum speed, of 120 packs a minute," said Richard James, a spokesman for Philip Morris International. That would make the machines capable of producing 22,000 KM of illegal cigarettes per hour at Bosnian prices, or 100,000 KM per hour if sold in Western Europe.

James said fake cigarette manufacturing in Bosnia is not unusual.

"Traditionally, [fake cigarettes] were being manufactured in China, that was the number one production center and probably still is today," said James. "But what we are seeing now is that counterfeit production is moving closer to end markets, where the goods are being sold to consumers." 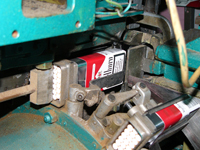 This German cigarette-packing machine is capable of producing 7,500 cartons of cigarettes worth about 750,000 KM in eight hours. (Foto: Uprava za indirektno oporezivanje BiH)

The machines in the plant in Grude had their serial numbers filed off. Officials are investigating the source of the machines, which could have come from a former state factory or another illegal factory.

In the operation in Grude, four people were arrested and released.

There have been other factories in the past, but prosecutors have never moved on them, despite reports from the Federation of BiH (FBiH) Financial Police. 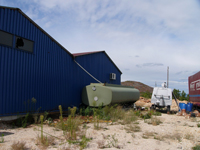 A factory in Grude where an illegal Marlboro production facility was found operating. (Foto: Uprava za indirektno oporezivanje BiH)
Financial Police say the state lost millions of KM in taxes. But nothing appears to have ever happened in the case, which was submitted to the prosecutor’s office of the former Herceg-Bosna government. CIN reporters called prosecutors office in Grude, Čapljina, and Mostar and none were aware of the case.

Praljak is currently in The Hague on trial for war crimes charges including murder and rape. He is best known for ordering the destruction of the Old Bridge in Mostar.

Praljak has transferred all his property to his brother Zoran Praljak and his adopted son Nikola Babić Praljak, who are among the wealthiest people in Croatia.

Zoran Praljak did not return calls from CIN.