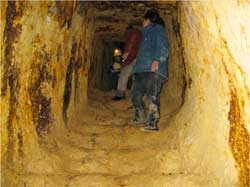 The old mining gallery at Rosia Montana, where the Romans once mined for gold.

Romanian prosecutors have opened a criminal investigation into Rosia Montana Gold Corporation (RMGC), the company that holds the license to exploit the largest open-pit gold mine in Europe. Rise Project, a member of the Organized Crime and Corruption Reporting Project (OCCRP), has learned that the investigation is focusing on money laundering and tax evasion. Prosecutors subsequently confirmed the nature of the investigation in a letter to Rise Project. Romanian prosecutors sent a letter to Rise Project confirming the investigation into RMGC for money laundering and tax evasion.

RMGC paid more than one million lei (US$300,000) to Kadok Interprest SRL, a company that prosecutors say is a phantom company used by a network of organized criminals from the Romanian city of Ploiesti. Prosecutors discovered the payments from RMGC to the phantom company in an investigation into the “Păvăleanu network,” which resulted in the arrest three weeks ago of Marcel Păvăleanu, an advisor to the Romanian government.

The director of RMGC, Dragoș Tănase, declined to comment to Rise Project, referring inquires to the company’s public relations department. “Țuca, Zbârcea și Asociații,” the law firm representing RMGC, said last week they had indirectly been told of the investigation, but understood that none of RMGC’s employees or management were the direct target of prosecutors.

The criminal investigation is the latest news development regarding a mining project that has been fraught with controversy. For the last three months Romanians, often in the thousands, have been protesting what they say is an an environmentally risky project and a larger problem of political corruption.

Gabriel Resources, the Canadian company that holds a majority stake in RMGC, wants to mine approximately 300 tons of gold. Though Gabriel Resources acquired the mining license in 1999, the project has since been stalled.