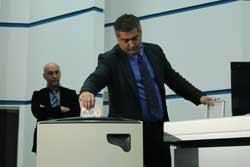 Georgian Ministry of Internal Affairs employee feeds a surveillance CD into the shredder.

After months of dithering over what to do with thousands of secret sex videos, Georgian officials on Sept. 5 fed 145 compact discs containing the illegal recordings of citizens’ sex lives into a high-powered shredder.

Some 100 people, most journalists, watched the destruction in a large auditorium at the Ministry of Internal Affairs.

The material was allegedly compiled by investigative agencies between 2007 and July 2012, a point Minister of Internal Affairs Irakli Garibashvili emphasized as he noted that other copies may still exist.

“There is a high probability that the former ruling party (United National Movement), possesses copies of the videos,” Garibashvili said.

But, he said, those who might possess such material should think twice about ever using it. “The (current Georgian Dream) government is going to adopt an amendment in the criminal code to make punishment for infringing privacy rights stricter.”

The current administration believes the surreptitious videos, featuring the sexual activities of politicians, activists and well-known Georgians of various parties, were stockpiled to use as blackmail.

Members of the UNM government have said that if any such recordings were made, it was the work of rogue units within the MIA and Ministry of Defense police. Others have accused the Georgian Dream of exaggeration, which led to yesterday’s public demonstration.

In the audience as the CDs were destroyed were about 70 journalists and  members of a special commission Prime Minister Bidzina Ivanishvili appointed to review the material and decide what to do with it. Garibashvili congratulated the audience and Georgia’s citizens, saying that those at risk of exposure can now relax.

Tamar Khaldani, the newly appointed inspector for Protection of Personal Data read out the numbers of each CD, after which an MIA employee showed the audience the number and then put each CD into the shredder.

According to commission members, the materials destroyed contain mainly sexual scenes, including homosexual and extramarital activity recorded in hotels, private houses and other locations.

Garibashvili says the investigation will continue. “Firstly, we should evaluate the process of illegal surveillance in order to find out the whole process, and only after that conduct an official investigation, which can lead to the people who were in charge of conducting surveillance.”

But Kakhi Kakhishvili, the only member of the commission who opposed destroying the materials, claimed it could damage investigations since the videos were evidence of wrongdoing.