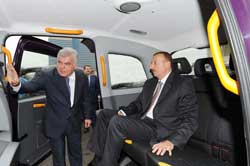 Family members of Azerbaijan’s Transport Minister and a prominent Azerbaijan company that does business with the ministry have close ties, raising serious questions about conflict of interest in the ministry’s activities.

Minister Ziya Mammadov’s son, Anar, and the Minister’s brother, Elton, are business partners with the members of the family of the founder of the Baghlan Group, a prominent Azerbaijan company involved in major projects in transportation, construction, sports complexes and oil exploration.

The Organized Crime and Corruption Reporting Project and Radio Free Europe/Radio Liberty (RFE/RL) found that Baghlan was the contractor on a series of major initiatives by the Ministry including the importing of 1,000 London taxis to Baku, the construction of an international bus station, and a lucrative road construction project.

The Group has received preferential treatment and the interlinked companies owned by the families have taken large shares or even monopolized certain transportation sectors like bus transport, taxis, road constraction, and cargo transportation services in the country. 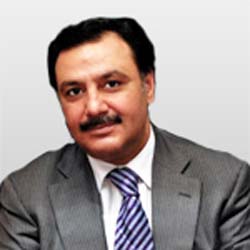 Hafiz Mammadov is chairman of Baghlan Group and president of Baku Football Club.

Businessman Hafiz Mammadov, who is not related to the minister, founded“Baghlan Group FZCO” which was registered in 2007 in the United Arab Emirates. The ties between the families include co-ownership of the Bank of Azerbaijan and a joint project to build an international bus station in Baku. Both families have top executives in the Baku Football Club. Companies owned by Anar Mammadov are also listed as members of the Baghlan Group companies. The Baghlan Group website is registered at the same address as a division of the Ministry of Transport.

At the same time, Baghlan Group companies have received lucrative, apparently non-competitive contracts to import and operate taxis and buses, and to build roads. The contracts were all approved by the Ministry of Transport.

“One of our fundamental objectives is to improve country’s transport infrastructure, including optimization of the local public transport system,” Hafiz Mammadov states in a Chairman’s statement on the Baghlan Group website.

According to that website, the company owns the the country's largest taxi company which operates more than 1000 London-style black cabs. The Group's bus company is also the country’s largest with a fleet of “hundreds of buses” that carry over one-fifth of all bus passengers within Baku.

At a 2013 meeting chaired by Azerbaijan President Ilham Aliyev, Transport Minister Mammadov spoke of the need for 2,000 new taxis and 1,200  new buses.  After the Minister’s presentation, President Aliyev said: “We must approach this issue comprehensively. Of course we should update the vehicle fleet. We should bring in the new buses and taxis.”

The London taxis were imported by the Baki Taxsi Company at a cost of US$28,000 apiece, in time for the city to host the Eurovision 2012 Song Contest. Baki Taxsi proposed importing the taxis and the Ministry of Transport agreed, Ilqar Qasimov said. There is no evidence that any tenders were ever issued.

The Baki Taxsi Company was registered at the Ministry of Taxes in April of 2010. The founder of the company is listed as Murad Farhad oglu Gasimov.

Baki Taxsi Director Ilqar Qasimov confirms that the company was actually established by the Baghlan Group, and that the Baghlan Group manages all the record-keeping and other official business for Baki Taxsi. Qasimov says there is a plan to import London taxis for use in other Azeri cities. 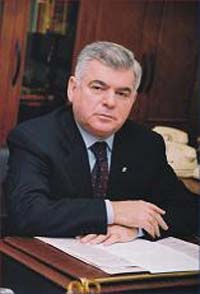 President Ilham Aliyev and Transport Minister Ziya Mammadov were quick to publicly praise the taxis as they appeared in busy quarters of Baku. But soon after the London taxis were imported, the Transport Ministry tightened regulations on other taxis. Ministry inspectors began forbidding other taxi drivers from parking in the city center and at metro stops giving the Baghlan-owned company a significant competitive advantage. Some drivers protested, but to no avail.

Niyamaddin Imanov has been a taxi owner-operator for 10 years. He says it has been impossible to compete with the London Taxis since they have arrived and received preferential treatment from the Transport Ministry.

“First they told us that Soviet-made cars could no longer be taxis,” said Imanov, who is currently driving a Daewoo model. “Then we were told we could no longer wait in our usual spots. We were told those spots were only for London Taxis.

“Without giving us any reasons, the Ministry of Transport created obstacles for us in order to give more business to the London Taxis.”

Qasimov said the Point Of Sale (POS) terminals in each London taxi which allow passengers to pay their taxi fare by credit card belong to the Bank of Azerbaijan which handles all transactions.

The taxi meters and Global Positioning System (GPS) devices in the London taxis belong to City Taxi LTD, which was established in 2008 by a Nizami Aga oglu Rafiyev. The company shares the same official address (24 Hasan Aliyvev) as the Baghlan Group and several other companies involved in the transportation industry.

“Any taxis brought into the country have received a license and permission to operate from the Ministry of Transport,” said ministry spokesman Namik Hasanov. “Nobody can bring these taxis without permission from the ministry.” When asked about the selection process, Hasanov said: “The companies that offer the best terms and services are chosen.”

Taxi driver Elman Mammadov found out he could only pay his taxes and license fees at a Bank of Azerbaijan branch.

The Baghlan connected bank has monopolized almost all taxi business.  All taxi drivers regardless of company must now pay their taxes and license fees only at Bank of Azerbaijan branches. Elman Mammadov has been working as a taxi driver for 30 years. In November, he paid his taxes and licenses at another bank because it was more convenient. But Tranport Ministry officials refused to accept his receipt because it wasn’t paid at a Bank of Azerbaijan branch.

The minister's son recently divested himself of his Bank of Azerbaijan shares. As of late January, 2013, the new shareholders are family members of Baghlan Group owner Hafiz Mammadov, including son Kanan (43 percent), son Sanan (43 percent) and brother Mubariz (13 percent). 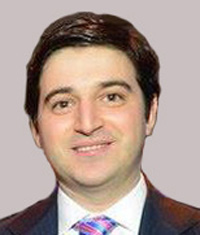 Anar Mammadov is the son of the Minister of Transport. He recently sold his shares in Bank of Azerbaijan. Family members of Baghlan Group chairman Hafiz Mammadov now control the bank.

Anar Mammadov, who also serves as chairman of the board of directors of ZQAN Holding,a conglomerate that includes construction, hotel and insurance companies, still has at least two key ties at the bank. Seymur Ismayil, chairman of the bank’s Supervisory Board, is a senior manager at ZQAN Holding.OK Supervisory Board member Ruslan Mammadov is a cousin of Anar Mamadov as well as his personal lawyer, according to several sources.

Among the properties listed under ZQAN Holding are the Meridian Hotel in Baku and the Azbentonit construction company. (Another ZQAN Holding company is the insurance firm Garant Sigorta, which is the insurer for passengers in London Taxis.)

There are other companies belonging to Baghlan Group that also specialize in transportation and infrastructure.

According to records from the Ministry of Taxes, the bus station belongs to Baki XXI Esr MMC, a company established by Elton Mammadov, brother of Transport Minister Ziya Mammadov. Elton Mammadov confirmed he was the owner in an interview with RFE/RL. 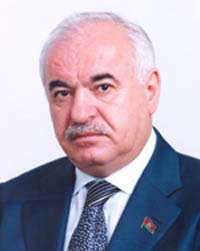 Elton Mammadov is the brother of the Minister of Transport and the owner of Baku International Bus Station.

According to Aygun Gadirli, head of the CEO office at the Azerbaijan office of Baghlan Group, Transgate owns 500 of the 2,400 buses operating in Baku.

According to Ministry of Transport spokesperson Namik Hasanov, the state spent $39 million in government funds on new busses.

“A total of 186 buses were purchased by the state,” Hasanov said. Noting there are about 50 bus companies in Azerbaijan, he said the Ministry distributed the buses among several companies so there would not be a monopoly. But when asked exactly which companies received buses and how many, Hasanov said he couldn’t give exact numbers.

The website www.baghlangroup.com is registered at the address Dilare Alieyva 230. That is also the official address of Azerbaijan State Railway LLC, a department in the Ministry of Transportation. It has significant contracts with the state railroad.

According to its website, “Baghlan Group is a leading freight agent for national railway and offers full range of transportations services, including planning, scheduling, handling, tracing, loading, unloading and logistics management for a range of rail cars as well as customs clearance. Full cargo transportation services within CIS and internationally along Silk Way from Eastern Asia to Western Europe for a number of local and multinational clients.” 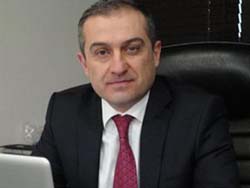 Ruslan Mammadov serves as personal lawyer for his cousin Anar Mammadov, the son of the Minister of Transport. Ruslan Mammadov is on the Supervisory Board of the Bank of Azerbaijan.

The company also is involved, possibly with other companies, in highway construction for the ministry and has several government contracts worth 1 billion Azeri New Manat (AZN) – about US$ 1.3 billion.  According to Baghlan spokesman Gadirli, this includes “several small projects” on a major Ministry of Transport plan to complete a 208-km concrete road connecting Baku and the Russian border outpost at Samur.

Away from the business offices, Baghlan and the Mammadov family share a sporting interest. Baghlan sponsors the Baku Futbol Club and Baghlan founder Hafiz Mammadov is the club president. The Minister of Transport’s son, Anar Mammadov, is the honorary president of the club. Anar’s ZQAN Holding, Bank of Azerbaijan and Baghlan Group are all club sponsors.

Minister of Transport spokesman Hasanov was asked about all the ties between the two Mammadov families. “Only the interests of Azerbaijan are important to the minister,” Hasanov said. “Maybe these businesses belong to someone close to the minister. If these people propose efficient and strong projects, why shouldn’t they be preferred?

“I don’t want to speak any more about it.”

In the Azeri language, the word “baghlan” can mean “closed” or it can mean “connected”. In the case of Baghlan Group, both seem to apply.