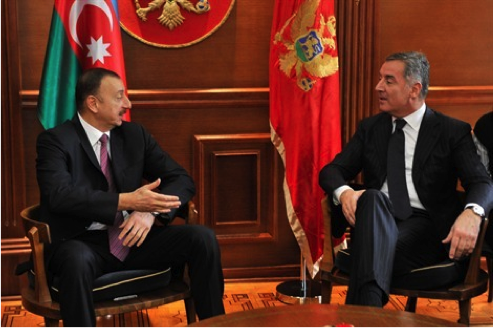 Azerbaijan continued its tour of stone-carved diplomacy this week with an announcement it will fund and build a statue in Montenegro of Javid Huseyn, an Azeri poet who was killed during Stalin’s purges.

The statue will sit in King’s Park, which the Azeri government is also paying to rebuild along with the street on which it sits. The Montenegrin government declined to give specifics regarding the cost of the project, but said it would be a multi-million dollar endeavor.

The Azeri government has installed statues in many other countries in recent years, including Bosnia and Herzegovina and Serbia. But all of those statues were of the former president, Heydar Aliyev. “It seems like a new policy of the government that whenever they get friendly with some European nation, they immediately install Heydar Aliyev’s statue there,” said Azeri blogger Ali Novruzov. “In Azerbaijan they put his statue everywhere, and now they are exporting the tradition,” he said. “It’s a continuation of the domestic policy that created a cult of personality around the late president.”

One such statue made headlines last month, when Mexico City authorities removed an Aliyev monument in response to widespread criticism. Protesters said they were offended by the statue, which honored a man known for his authoritarian rule and rampant human rights abuses.

It was likely the fear of similar such protests that persuaded the Azeri and Montenegrin governments to forego another Aliyev statue this time, in favor of the more palatable poet Huseyn.  “It would be too much, even for Montenegro,” said Milka Tadic, the editor of Montenegro’s The Monitor magazine. “The poet is easier to sell.”

Both Heydar Aliyev and his son Ilham, the current president of Azerbaijan, are known for their absolutist styles and dictatorial regimes. Heydar was a KGB general, and rose to leadership while Azerbaijan was part of the Soviet Union. From his seat of power, he purged his opponents under the guise of anti-corruption programs.

His son Ilham, who inherited the presidency, has been compared to a mafia crime boss in US diplomatic cables.  Under his rule, Azerbaijan has been criticized for human rights abuses, including the practice of routinely imprisoning journalists and civic activists. .

But even more endemic to Aliyev’s regime is the government’s blatant corruption. Recent OCCRP/Radio Free Europe investigations have shown the President and his family amassing important assets through the privatization of state-owned industries and holding secret stakes in the country’s largest businesses. The ruling family has also heavily invested in foreign properties in places like the Czech Republic, a favorite destination for elites looking to hide cash.

Despite all this, the Azeri government presses forward with efforts to promote its image as a wealthy and generous neighbor.  In  Azerbaijan, the cult of personality Ilham has built using his father’s model appears to be working, and now it has moved to the virtual world. .

"For many years, the online space was dominated by opposition,” said Katy Pearce, a professor at Washington University and an expert on technology in former Soviet nations. "But two years ago there was a initiative by the youth wing of the ruling party to start being more active on social media.”

A skilled group of young, internet-savvy party members lead up online campaigns. Their strategy is not sophisticated, Pearce said, but it doesn’t have to be; plenty of Azerbaijanis will join the campaign willingly. Increasingly, young Azerbaijanis "make a rationalized decision to go pro-government" when they see the new young elite flaunting their lavish lifestyles online, through pictures of glam ski trips and parties. "The key to the good life is to get in with the pro-government youth, and once they get inside the inner circle, they have to demonstrate their loyalty to the leadership," Pearce said.

Their actions were evident when OCCRP named Aliyev its “Crime and Corruption Man of the Year.”  OCCRP and other media who ran the story were bombarded by an organized letter writing campaign that generated about 6,000 emails, some of which were automated.

The same oil money that created this new young elite is funding Azerbaijan’s foreign investments. The latest statue blitz coincides with Aliyev’s plans to build a large and profitable luxury resort in Montenegro, which he was in the country this week to promote. The €4 billion resort will be built on the island of Kumbor, at a former barracks which Azerbaijan’s state oil company will lease from the Montenegrin government for 90 years, at a yet-undisclosed sum.

But the way that SOCAR won the bid to build the hotel on Kumbor is suspicious. The oil company didn’t meet the basic bid requirements, not least because it is not in the tourism industry, so it did not bid itself. Instead, SOCAR obtained the tender through a shell company called Triangle, according to reports by Monitor Magazine.  When the main competitor – an American company – objected that it was passed over in favor of an unqualified company – ranked, incidentally, as one of the world’s most corrupt by Transparency International – the complaint was dismissed as “technical,” The Monitor reported.

“It is much easier to manipulate money from Azerbaijan,” said Milka Tadic. “He really needs money badly and that’s why he went with Aliyev,” she said. “Aliyev is one of the rare solutions for Mr. Djukanovic.”

In a press release Tuesday, the Montenegrin government said relations between the two countries had been “developing dynamically,” and quoted Đukanović emphasizing the government’s willingness to work toward strengthening its partnership with Azerbaijan.