Russia’s federal Investigative Committee began preparing a criminal case against a Siberian official who tackled a journalist to the floor over the weekend after being confronted with questions about corruption. 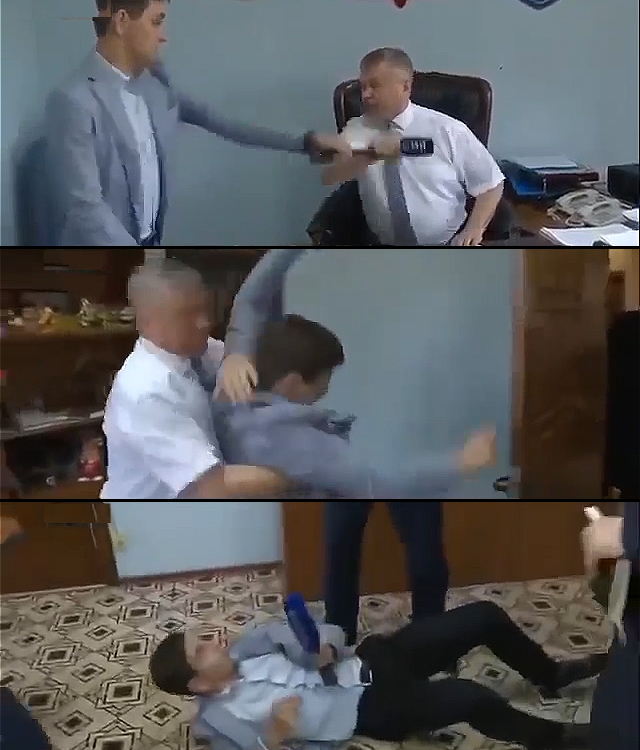 Screengrabs from Russia24 videoSergei Zaitsev, head of the Shirinskiy District in Khakassia, stood up and threw local reporter Ivan Litomin to the ground when he started pushing for answers about the rebuilding efforts of the district after a major fire in 2015. Zaitsev’s deputies then attempted to block the cameras and seize them before escorting the reporters out of the building.

The fires in question killed over 30 people and left thousands without homes. A later investigation resulted in a fire chief being arrested for negligence, but not until a visit from Vladimir Putin himself, the Moscow Times reports.

The questions posed by Litomin seem to be around the compensation for victims and rebuilding that took place after the fires were put out, according to an interview with Zaitsev after the incident.

He claims that they pestered him about the four-year old issue, pushing him to violence.

In a press release on Monday the Investigative Committee said it expects to charge him with obstructing journalism. He could face up to six years if convicted.

Officials must answer questions people ask them, Yevgeny Revenko, another member of the council, said in a statement.

“We must look people straight and honestly in the eyes. Unfortunately, judging by the comments from Sergey Zaitsev himself, he did not admit his guilt, insists he is right and is not going to apologize for his actions,” he said, adding that the party can not move forward with people like Zaitsev.