As protesters painted the main square in Skopje red Monday evening, commemorating the murder of a young man by a police officer five years ago, President Gjorge Ivanov decided to revoke all 56 pardons he issued last month for top politicians and their alleged associates involved in a wiretapping scandal that sparked the long-running political crisis in the country. 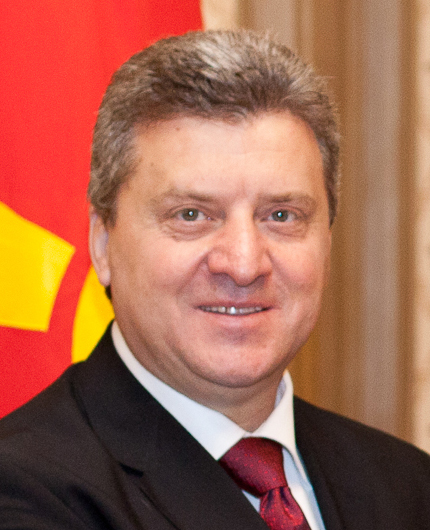 Gjorge Ivanov (Photo: State Chancellery of Latvia) Ivanov made the move just one day before a German special envoy would arrive in the country to help pull Macedonia out of the political crisis that began more than a year ago.

The pardons, handed down on April 12, gave amnesty to all the politicians and government officials whose alleged wrongdoing was implied within a series of recordings the Macedonian opposition Social Democrats (SDSM) had been publishing since the beginning of 2015.

The move added fuel to the flame at a time when Macedonia was already marred by frequent protests due to ongoing differences between Macedonia's ruling VMRO-DPMNE and the SDSM.

While Skopje had seen its fair share of discontent in the months leading up to 2015, the publication of the controversial tapes would ignite a political crisis that culminated with a series of protests in May last year.

According to opposition leader Zoran Zaev, former Prime Minister Nikola Gruevski and his cousin, then-chief of the Secret Police Saso Mijalkov, had ordered the illegal wiretapping more than 20,000 Macedonian citizens, including politicians, NGO activists, journalists, businessmen and even Gruevski's own cabinet members.

In a country of only two million, that would mean the government had bugged one in 100 of its people.

One of the cases that received mass attention were the recordings implying that some of Gruevski's closest associates attempted to cover up the government's role in the murder of a young man by a policeman. That particular recording features what appears to be conversations between Mijalkov, former Interior Minister Gordana Jankulovska, and several other top officials discussing an attempt to protect the police officer who murdered 21-year-old Martin Neskovski.

According to footage by local Nova TV, protesters painted the main square streets red Monday in memory of Neskovskis murder.

The tape was released on May 5, the day when about 2,000 people marched on the capital, clashing with police in front of the government building. Protesters threw stones and cabbages, and set trash cans ablaze.

Meanwhile, Gruevski denied any wrongdoing, claiming that the tapes were "created, glued and assembled" by the opposition in order to destabilize Macedonia and mount a coup with the help of an unnamed foreign intelligence agency.

By the end of the month, more anti-government protests involving more than 40,000 protestors would ensue.

Macedonia entered a deadlock, which would ease up following the June-July 2015 Przino agreement- a European Union-brokered deal between Macedonia's major political parties. It included parliamentary elections to take place in April this year, the resignation of Gruevski to take place at least 100 days before these elections, the establishment of an independent Special Prosecutor's office that would have full authority to investigate the wiretapping allegations, and a set of reforms, including measures to clean up the electoral roll, media reforms to ensure balanced reporting and measures preventing intimidation of voters.

The office, headed by prosecutor Katica Janeva, had already submitted several charges against a number of those implied within the scandal when Ivanov made the decision to pardon all those involved.

The move would effectively block any activities of Janeva's office.

Janeva and her deputies, however, continued their work.

Meanwhile, more than 10.000 protesters would take to the streets again asking for Ivanov not only to revoke the pardons, but also to step down.

The president defended his standpoint saying the decision is in Macedonia's best interest - to help "overcome the political crisis and ease tensions between political opponents" ahead of the elections.

Both the SDSM, and initially the VMRO-DPMNE, had condemned the pardons, including both Zoran Zaev and Nikola Gruevski themselves.

According to Balkan Insight, the VMRO-DPMNE dominated list of those pardoned included Gruevski himself, who was pardoned in five criminal proceedings.

The list also, however, included Zoran Zaev, who received a pardon for two criminal cases against him that stem from 2015.

The move was heavily criticized by international observers.

Meanwhile, on May 18, the Macedonian parliament postponed the June 5 elections since some of the key election reforms, as part of the Przino agreement, have not been met.

If anyone else wanted their pardon revoked, they would have to file a personal request to him.

This, said many observers, was not enough.

According to the US Embassy in Skopje, “partial or selective revocations of the pardons will add to a growing sense of impunity in this country and prevent Macedonia from making progress on its most important goals, including progress toward NATO and the EU”.

On Monday, however, Ivanov finally announced the revocation of all 56 pardons. In his written statement, Ivanov says he came to the decision because in the ten days since he partially revoked his pardons, “we have witnessed different interpretations of this decision on the polarized political scene, trying to score political points (….)”.

Both the VMRO-DPMNE, and the SDSM welcomed him revoking the pardons.

However, the protesters are not satisfied.

According to Nova TV, the protesters gave an ultimatum to the government to meet all necessary reforms for snap elections to take place, ensure the legitimacy of the Special Prosecutor's office in the Constitutional Court, discontinue the persecution of those involved in the protests and free those who were arrested for taking part in them, as well as for Ivanov, and the VMRO-DPMNE majority government to resign by June 18.

On Tuesday, German special envoy to Macedonia Johannes Haindl arrived in Skopje to meet with the main party leaders and top officials. According to Balkan Insight, this is his third visit to Macedonia in the past month.

His goal: mediating between the main political parties to continue the crisis negotiations, which have been in stalemate for several weeks.

Whether his visit will finally reinstate negotiations and help to finally pull the country out of the political crisis remains uncertain.