The Spanish Civil Guard dealt a major blow to an organized money-laundering ring with connections to two Russian crime syndicates on Tuesday. The operation, two years in the making, was named “Usura” and was supported by Europol. 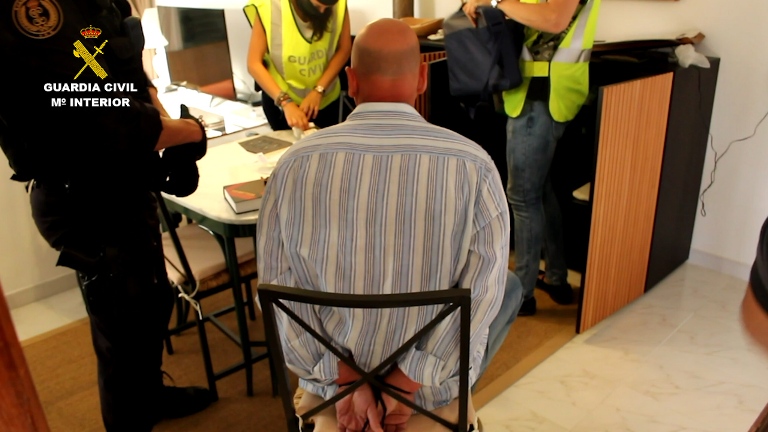 One of the Alleged Criminals (PHOTO: Spanish Civil Guard)

Eight suspects were arrested, 191 properties were seized, and 142 financial products, such as bank accounts, were confiscated, as well as € 120,000 in cash and numerous mobile phones, computers and documents. The operation involved 180 Spanish Civil Guards.

According to El Mundo, the suspects consist of six Russians, a Ukrainian lawyer, and a Spanish citizen.

The criminals used offshore companies that offered high-interest loans and mortgages to Spanish and foreign customers to hide financial operations and investments. The investigation found that the companies had links to tax havens and to professional “front men” known for money laundering.

This isn’t the first instance of Russian syndicates showing up in Spain.

In May, the National Court of Spain issued arrest warrants for several Russian citizens who were linked to organized crime in the region, including several current and former high-level government officials.

Among the wanted are the chair of the State Duma Committee on Credit Organizations and Financial Markets, Vladislav Reznik, as well as the current deputy director of the Federal Drug Control Service of the Russian Federation, Nikolai Aulov, and even a former deputy of Russia’s Investigative Committee, Igor Sobolevsky.

The warrant for Vladislav Reznik was later revoked, according to the Associated Press.